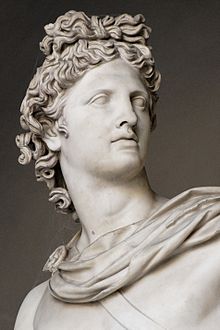 Currently, in Literacy essential class, we’re learning about Ancient Civilization; as in history while learning literature as well. The historical contents that we’re focusing on are The First Civilizations, Ancient Egypt and African societies, Ancient Greece, Ancient Rome and Roman Empire and World Religions. The literacy skills that we are going to get out of this unit are:

For the past weeks of this unit, we have been doing a Greek Mythology Layered Project as our final product. One of the project was to write a research report on one of the 12 Greek Olympian gods and goddesses. I have randomly assigned to research on Apollo, the god of light and music. In the report, we are assigned to write 7-paragraph informational report on the god that we are assigned.

Here is the report that I wrote for the god, Apollo.

Apollo is one of the most complex and important gods in Greek mythology, and is the god of many things, including: music, art oracles, archery, medicine, sun, plague, light and knowledge. He is the son of Zeus and the Tita Leto, and was born in Greek island of Delos along with his older twin sister Artemis – goddess of the hunt. Apollo is a wise god and his myths describe him as a cheerful and light-hearted individual. Since Apollo was a musical talent filled with poetic words; as poems are often set to music, he was considered as the god of Music and Poetry.

The lyre which is perhaps his most well-known symbol signifying that he is the god of music. Another role Apollo had in Greek myth was to bring the sun to earth each day. According to the Greek myth, each morning Apollo rides a golden flaming chariot across the sky bringing daylight to the world. In the evening his twin, Artemis, rides her own chariot across the sky bringing darkness. He also considered as the god of healing and medicine, either through himself or through his son Asclepius. He could also bring disease and plague with his arrows; the god that can cause disease is also able to prevent it. In addition to that, Apollo taught men the art of medicine, so he is often referred to as “The Healer.” Predominantly, Apollo is alternately referred to as the God of Light and the God of Truth and because of his truthfulness and integrity, he was granted the gift of prophecy and oracles, meaning that he could look into the future but it wasn’t always a guarantee.

Apollo has his father and mother Zeus, the king of Gods and the Titaness Leto on the Greek island of Delos, conceived during Zeus’s marriage to Hera; his twin sister Artimis and his half sister Eilityia, Eris, Hebe, and Perseophone, but that is not half of Apollo’s family.  He also has his half brothers, Ares, Dinoysus, Hephaestus, Hercules, and Herme. Apollo only has three cousins as well Arion, Desopena, and Trition. He also had paternal grandparents Cronus and Rhea along with his two wonderful great-grandparents Ouranos and Gaea. Apollo was not lucky in love. His first love was Daphne, and Eros, the god of sexual attraction caused problem with this relationship. Eros shot a golden love arrow into Apollo’s heart, and an anti-love one into Daphne’s. Apollo passionately chased after Daphne but she was scared so she prayed to her father, Peneus, the river god, for help; he turned her into a laurel tree. Apollo was truly still loved her, so he the made the laurel a sacred tree. Apollo also has a love affair for Cassandra, who he promised to give her the power of prophecy if she would comply with his desires. She accepted the proposal, received the gift, and then refused Apollo her favours and so Apollo took revenge on her by decreed that nobody would believe her. People believed that she was a madwoman. Apollo fell in love with another beautiful young woman who became pregnant with his child. Apollo assigned a white raven to spy on Cornonis, and the raven reported back that she was cheating on him. Apollo has Coronis killed and later regretted this act, but he luckily snatched the unborn child from her naming him Asclepius, who later became the god of healing and medicine. Apollo also suffered when he fell in love with a man, Hyacinth, son of the Kind of Sparta. Greek man of this time period had open gay relationships; one day they had a discus throwing match, and Apollo accidently killed Hyacinth in such tragedy. Apollo did not marry anybody, but Apollo was a bisexual person. He slept with a lot of men just for the pleasure of it but he did have four kids, Asclepius, Troilus, Aristaeus, Orpheus, even though he wasn’t married.

Apollo’s mother, Leto, was the goddess of motherhood. She seduced Zeus and became pregnant with twins, but Hera was furious over the affair and made sure that Leto was unable to find a shelter to give birth. Hera even kept her own daughter, Eileithyia, from helping Leto give birth, as she was the goddess of childbirth. Zeus felt terrible for the pain and suffering Leto was going through; out of pity for Leto, Zeus turned her into a quail so she could safely give birth to their children. Leto searched all over Greece until she found a small island known as Delos. Hera was unable to stop Leto from settling on the island as it was being blown by the wind and moved by the waves. Leto suffered for nine days and nine nights with terrible labor pains. On the tenth day, she went to a small lake and leaned up against a palm tree. She gave birth alone ot Artemis who would become the Greek goddess of the hunt. But Artemis immediately took on a new role and assisted her mother in the birth of her brother Apollo. He was fed on nectar and ambrosia and quickly grew to manhood.

There are only a few descriptions of Apollo in literature that we can form an imagination to give us a good idea of what he looked like. In artistic representations of the god, he is always depicted as the ideal of kouros, which mean a young, athletic and a physically handsome man with golden hair and beardless; with a crown of laurel wreath of his head. There are many symbols associated with Apollo, including his silver bow and arrows represent the myth where he defeated the monster Phython. Apollo is also the god of plagues and is known for shooting plague arrows at the enemy during the Trojan war. The lyre which is perhaps his most well-known symbol signifying that he is the god of music. In the ancient myths the god Hermes gifted Apollo the lyre in exchange for the rod of health. Apollo’s lyre has the power to cause things like stones to become musical instruments.

The raven is a symbol of Apollo’s anger. At one time the raven was a white bird but after delivering bad news to the god he turned all ravens black. The bird had the bad news of having to let Apollo know his lover Coronis was being unfaithful. The rays of light that radiate from his head along with the wreath he wears are both meant to symbolize that he is the god of the sun. Lastly, the branch of laurels was actually something Apollo wore as a sign of his love for the demigod Daphne.

There was a temple built in Apollo’s honor, it was often filled with people who were hoping to beg Apollo to use his gifts, particularly to help foretell their futures. But some said there were two reasons why people came to Apollo’s temple, to consult with his oracle, and to be purified after commiting a crime. Apollo’s sanctuary was where the Oracle Delphi dwelt. Oracle of Delphi is his assistant who help with the prophetic side of his nature, who could foretell the future. This temple was known to be the center of the entire world. It was a spot where Apollo offered advice and wisdom to those who seek through the oracle. The importance of this temple in the ancient world was as a place of guaranteed peace, where leaders from all over the known world – representatives of the Greek city-states, Cretans, Macedonians and even Persians – could come together, even if they were warring elsewhere, to celebrate the Pythian Games (one of the four Panhellenic Games of Ancient Greece), to make offerings and consult the Oracle.

There is a myth teeling Apollo became known as the god of music. It begins by describing a Python who lived on Mount Parnassus, he is lethal, killing anyone who crossed him. Four days, after Apollo born, he was strong and able. He had been given a silver bow with golden arrows for the blacksmith Hephaestus. Apollo wanted to seek revenge on Python for every he had done to the Greeks, including chasing his mother while she was pregnant. Apollo went to the Phython’s cave and shot an arrow at the Python and it pierced him in the forehead. The Python screamed in pain so loudly that all Greece heard it, but he couldn’t save himself but succumbed to his jury. Apollo celebrated his victory by playing a song using his lyre for everyone to hear. The song was so perfect that it earned him the title of god of music.

Although Apollo was Zeus’s favorite son, and next to Zeus, the most important god, he personally has some lack of emotional depth. Apollo is not aware that anything besides thought can give life meaning. He need to live in the moment, feel sensations, explore his feeling, and have outer experiences like Dionysus. It would be easy to do this through music and dance, as Apollo has already achieved his expertise. He must learn to follow his heart, and move beyond the boundaries of his thinking world. After all, Apollo is still one of the powerful 12 Olympian gods. Follow by his forename, Phoebus, means “bright” or “pure” and connects him to his grandmother, the Titan Phoebe. He served many roles in mythology such as bringing the sun to each new day, predicting the future, and he was also the god of music, and healing. Like all gods, he certainly led a colorful existence.

Liger Leadership Academy students are English Language Learners. They have been immersed in English for over five years but are still developing grammar and fluency. At Liger, we pride ourselves on prioritizing process over product. Please excuse any English errors as part of the learning continuum our students have taken over the years.